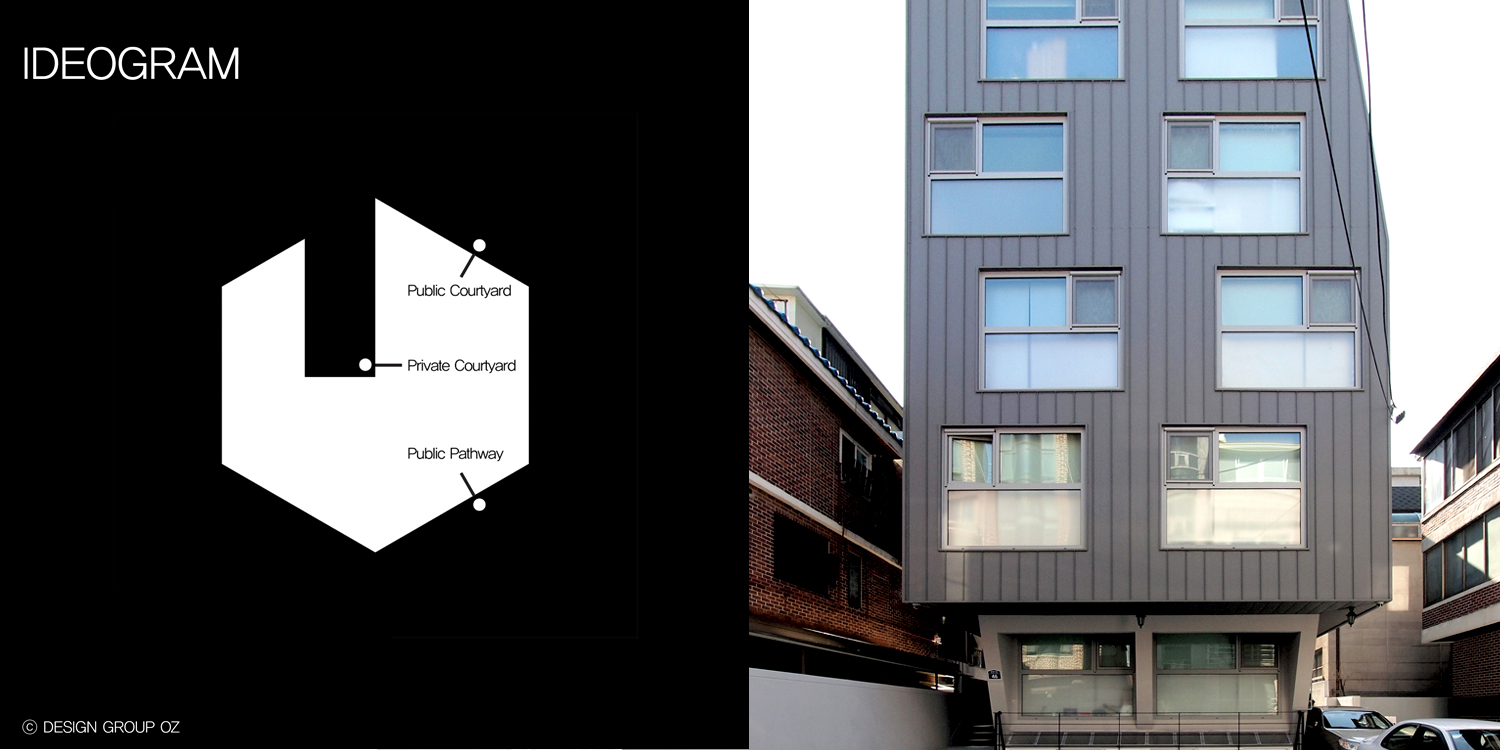 The given condition and the selected ideas

In general, the ratio of exclusive private area for a multifamily housing units is about 60 percent and legally categorized into four stories of residential space and each story for common hall, parking lot and underground neighborhood commercial facilities. Also, to have parking space, parking lots are arranged in parallel, bordering on the front street. Likewise, to take advantage of the maximum building coverage ratio and floor area ratio, they were placed adjacent to each other with the legally allowed minimum clearance between them.

The problem is that this space composition frequently blocks much of the layer of adjacent urban spaces. As we often witness, it creates a heavy-looking and blocked up street space atmosphere. In fact, the previous building that occupied the relevant site was also completely blocked from the dead-end back street. Thus, the residents living adjacent to the dead-end street had to constantly bicker when parking their cars in the shady backstreet. Moreover, they also had difficulties transiting through a narrow backstreet everyday.

Through an analysis on land and regulation, we found that it is not necessary to construct the building along the front street, in order to take full advantage of the maximum floor area ratio. Also, a public pass was allowed that connects both the back and front street of the building by precisely minimizing the width of space. Internally, the corridor space was slimmed down as a way to remove some of the common space area. That way, common space was converted to public space.

To obtain parking space required for 13 households, a typical house shape was turned upside down. The first floor was set aside for community facilities. Residential space occupies the second to fifth floors. For the converted shape, the common hall space was minimized and we chose a structural system such that the majority of building load was placed on the structure wall that forms a crossed-shape around the elevator hall, along with the structural column slanted towards the inside.

The maximum exclusive private space was obtained by designing the utility spaces as close as possible to the cross-shaped structure wall. These included a stair room, washroom, boiler room, shoe room, duct area, etc. that was designed based on the critical dimension (minimum dimension). During the design process to achieve repetitive optimization, a part of the common space area was converted into the exclusive private space, resulting in reaching up to 76 percent of exclusive use ratio.

This approach has always been our main interest to increase the openness of overall space. On the other hand, the majority of the critical dimension (minimum dimension) is the size that is used only in multifamily construction market units.

The owner wanted to have a courtyard on the rooftop as is initiated in traditional Korean house. Instead, by making use of the volume divided from north to south with a cross shaped structural wall and the core, it was designed as a duplex style space where the owner occupies both the entire fifth floor and the fourth and fifth floor part of building in the south.

A total of three courtyards were designed including the courtyard that stretches the length of two stories in the living room, another courtyard situated on the rooftop that is in the loft and the last one on the rooftop where one can have a panoramic view of the Bongchun-dong area. In particular, the rooftop courtyard in the north can be accessed by the tenants. This appends a more public aspect to the project compared with other multifamily housing units where the owner strictly prohibits others from using the rooftop space.