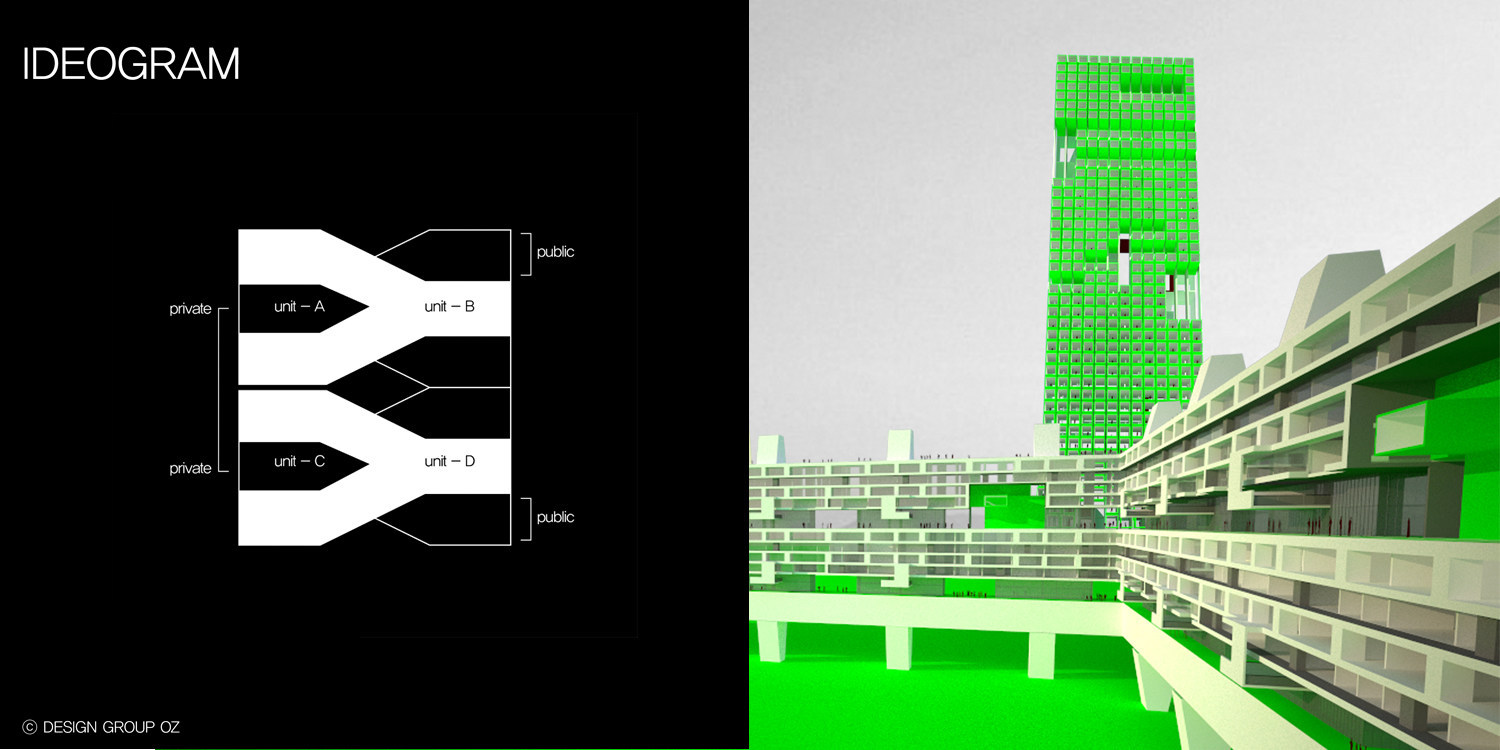 This project is to build apartment houses in suburban area of Hopyung-dong, Namyangju-si. Though the plan could not be realized owing to some critical problems of the developer, it was one of the projects that our design approach was materialized in the most concrete way.

The building was to be constructed in a natural green area where buildable area is restricted under 20% of the site area and maximum FAR(Floor Area Ratio) is 100% of the site area. In addition, its height must be smaller than four stories by regulation. As it was restricted to build a building smaller than a four ground-story one, actually 100% of FAR is meaningless in this plan. In the end, 20% for the building footprint and 80% of FAR was the optimal maximum choice we could take.

However, the contradictory side of this project is that the developer demanded maximum freedom of imagination while they push us to take only maximum volume: it looks like strange capacity of 100% FAR by regulation which doesn’t make sense at all. Anyway, they asked us to explore a new type of residential space within maximum volume and we decided to take it as an innovative opportunity to examine and analyze various types of house and its possibility from the zero point as if we do not have any preconception about it. By assembling and relocating spatial elements such as core, master bedroom and utility spaces, we could prove that we can make a new and unique housing unit, which is located between “Duplex” and “Skip floor” in housing typology, while making use of the current typical construction technique and structural system. Through three dimensional combinations, we could make a plan with added service area, which is not counted as a rental area in Korea, such as a garret or a basement room to every apartment unit, for all four households.

Furthermore, we discovered that this new type of space is quite practical not only in terms of spatial flexibility and compactness, but also in energy and mechanical efficiency. Likewise, we developed the design, making the best use of the merits of the house.

As a result, we come up with a four-story apartment house that is composed of 4 units of 3 different floors with a five-bay panoramic view. Judging from the sum of the units, it is regarded as the building composed of 12 floors (4 units * 3 floors) and it can be interpreted that we succeeded to build a house which has 120% of Floor Area Ratio in the end. We believe the increased area of 40% FAR and unique interior and exterior spaces are surely a design premium or let say “design affordability” which has been achieved by re-organizing and re-assembling the spaces systematically.

In brief, this project has been designed in proposal of individual units that were stacked four stories high in a skipped duplex style, where every household has a service area in both underground and the rooftop so as to activate not just efficient space-use but also possible encounters with each other. It is our crucial design strategy to deal with publicness through “design of affordability”.