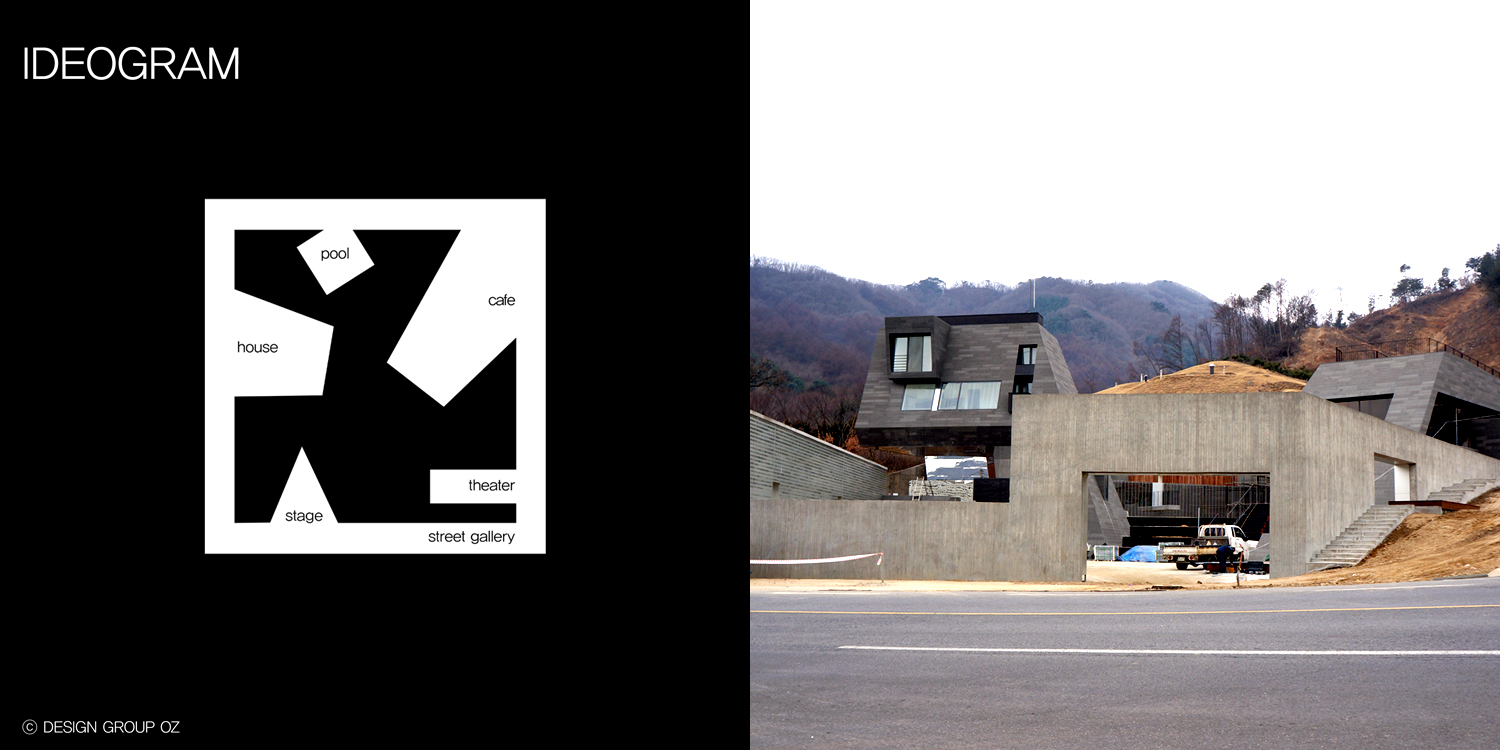 The project owner hoped for a restaurant, a house, and a space for small-scale performance on the site located close to the road running along the Bukhangang(North Han-river). The task was basically about consolidating seperated functions and the space in between the pieces of land, and planning to work with the strength of the site with the view of the river, while we also wanted to enliven the compound by appropriately arranging the public spaces. More than anything else, a large fence is put on the perimeter of the site to unify the entire premises while a public gallery is placed to serve like an amphitheater surrounded by commons and sharing spaces.

The amphitheater as the stage for various activities

The restriction caused to the gross floor area by the characteristics of the site rather serves to enrich its exterior space. The private spaces including the restaurant, the house, and the pool are placed like islands floating on the site, while the public space takes advantage of the natural slope on the site to provide varied forms of resting places and a stage inside the large space of the amphitheater. The lowest portion takes in the plaza for events including the stage, and the upper part supports a private pool harboring the private garden, while the space in between the building that naturally connect the higher and lower parts accomodates a leveled garden similar to audience seating. The plaza for events holds the stage for small concerts, while the leveled garden, the steps in the lower portion of the restaurant, and indoor space supply diverse audience seating for an event. Also, at the opening that links the inside and outside, a stage, a staircase, and an observation deck are placed so that various activities can be visually shared with one another. Meanwhile, the Main office of Seoryung Development Co., located across the road, is planned to be part of one single frame that encapsulates the Bukhangang, while the activities on its top are intended to unfold like on a stage.

The Namyangju Complex, while it is encircled with a large fence, does not come as a closed space, but it rather works as a public space with a nice coordination of the views and space use. The lower part of the building that, finished with stainless mirrors, reflects the surrounding scenes and people, demonstrates its public character as such. The project in The Namyangju is designed to approach publicness by sharing with outside such various spaces like the stage that penetrates the interior and the exterior from the public gallery lying outside the fence.